By Harry Kloman, University of Pittsburgh

IF YOU DON’T HAVE THE DESIRE, patience or will to make your own homebrew t’ej, you may be able to buy it from numerous wineries across the United States that make it.

Then again, you may not.

The internet has made it easy to buy almost anything, but alcohol is one exception: Each state regulates the sale of alcohol, and that includes alcohol that enters a state through the mail. So if you can’t find t’ej at a store in your town, you’ll first need to find some online – and then, you’ll have to hope that your state permits you to buy it and that the business selling it, whether an alcohol retailer or the winery, has purchased the required license to ship it to your state.

I live in Pennsylvania, a state with some of the nation’s most restrictive alcohol laws. I can buy t’ej from out of state, but the business selling it must buy a state license to sell it to me. I’ve had wineries decline to sell me t’ej because they didn’t have the license. One very kind winemaker from another state once sent me a bottle for free, thus breaking no law, asking me only to reimburse him for postage. If an Ethiopian restaurant in Pennsylvania wants to sell t’ej – which our state-owned liquor stores don’t carry – it must ask the state to make a special purchase. The t’ej then arrives at a local liquor store, where the restaurateur has to pick it up. And of course, making your own t’ej and selling it is forbidden.

Your best bet, then, is to find a shop in your town or state that sells a brand of commercial t’ej – and good luck with that. I know from talking to t’ej-makers that it’s hard to get it into shops in cities that have no large Ethiopian community, and even into cities that do. Most Ethiopians eschew winery t’ej and simply make their own.

T’ej made by a winery will look and taste quite different than homebrew: Wineries refine and filter their product thoroughly, so it will be much clearer than homemade t’ej – sometimes almost the color of a white wine, or possibly a light golden yellow. The level of sweetness will vary, too, and unless a winery promotes its product as being “dry,” count on tasting the sweetness, like you might in a dessert wine. Very rarely will you taste the effect of the gesho like you do with homebrew.

And some Ethiopian markets in cities big enough to have them sell nicely labeled bottles of t’ej that come from the basement “wineries” of Ethiopians in their communities. These are a slightly higher class of homebrew, and if you’re lucky enough to find one, grab it while you can. Ethiopians call t’ej of this sort defres (“muddy”) or lega (“young”) – that is, unfiltered, and probably not transparent, because home brewers don’t have the equipment that a winery uses to make its t’ej sparkling clear. But don’t worry about the sediment in the bottle, and be forewarned that it’ll probably hiss at you when you pop the cork or screw off the bottle cap.

So here are some of the commercial brands of t’ej that I’ve found in the United States, as well as a few in Europe. In several cases, I know (or know of) the winemaker, and I’ve tasted most of the ones I cite below. My list is by no means every brand of t’ej made in the states, just the brands that have been around for a while and that produce t’ej regularly. A few wineries have made small batches of t’ej and sold out, never to make it again.

♦ Axum Tej, Heritage Wines, Rutherford, NJ. Araya Yibrehu, the company’s owner and winemaker, is probably the dean of t’ej in the United States. In 1979, he opened and co-owned Sheba, New York City’s first Ethiopian restaurant, and he began making t’ej for commercial sale in the 1990s. His current company makes several varieties and brands – for example, his Saba Tej is looks and tastes more like an unfiltered variety – but Axum Tej is his mainstay and the one you’re most likely to find.

♦ Bee d’Vine, San Francisco, CA. Ayele Solomon’s honey wine doesn’t call itself t’ej, but it’s still very Ethiopian. The wine’s label subtly incorporates elements of ancient Ethiopian culture as a nod to t’ej, and Ayele himself was born in Ethiopia. His family moved to the U.S. when he was a child, and he now divides his professional time between his two homelands.

The company has also created a charity to help Ethiopian beekeepers convert from inefficient old-style hives – which hang precariously from trees – to modern hives that produce seven to 10 times more honey. For every case of wine sold, Bee d’Vine contributes to the charity. Bee d’Vine sells its wine nationwide through its website. The wine comes in two varieties: brut (dry) and demi-sec (semi-sweet).

To teach people about honey wine, Ayele has written an illustrated book, The Celebrated Story of Honey Wine, that’s available for download at the company’s website as a PDF and audiobook. You can also order a printed copy of the book, which pays homage to t’ej, as well as honey wine in general, tracing its history back for thousands of years.

♦ Enat Tej, Enat Winery, Oakland, CA. Enat is the Ethiopian word for mother, and company owner Herb Houston based his t’ej on a recipe provided by his Ethiopian mother-in-law. The winery makes two varieties: traditional and orange.

♦ Regal Tej, Easley Winery, Indianapolis, IN. This t’ej came about when the winemaker created it for Meskerem Ethiopian Restaurant, which once had three locations in New York City and a spinoff in Charlotte, N.C. You’ll now find it in a number of Ethiopian restaurants around the country, and the winery’s owner, Mark Easley, even exports some of his t’ej to Canada.

♦ Sheba Tej, Brotherhood Winery, Washingtonville, NY. Brotherhood is considered to be the oldest operating winery in the U.S., founded in 1839. It has made Sheba Tej for several decades.

♦ Time Traveler Tej, Robertson and Associates Winery, Parker, CO. Cris Robertson is a beekeeper turned mead-maker turned t’ej-maker, and he uses gesho to flavor his two varieties of t’ej, which he makes from orange blossom and wildflower honey. The company ships to numerous states, and just a few months after its launch, Time Traveler Tej won a gold medal at the Los Angeles International Wine Competition. 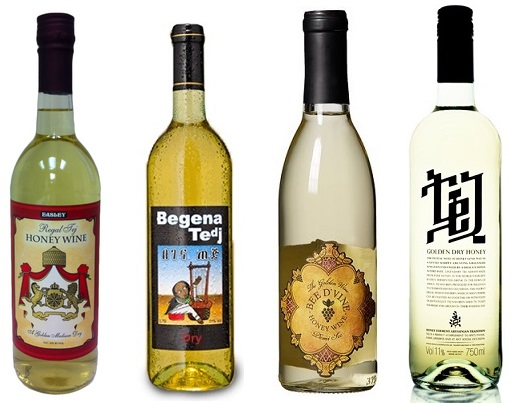 ♦ Big Tree, Queen Sheba Winery, Woodland, CA. A group of doctoral graduates from the University of California at Davis came together in 2011 to create Queen Sheba Winery, and they now sell t’ej on their website in two varieties: one made from orange blossom honey, one made from clover honey. The company is a “zero waste facility,” and all of its suppliers, including its honey, are found within a 100-mile radius of the winery.

♦ Lost Tribes Tej, Lost Tribes Brew, New York, NY. This company worked with an Ethiopian Jew living in Israel to create its recipe, and a portion of the sales of the t’ej goes to help the Beta Israel (“House of Israel”), which is what Ethiopian Jews call themselves. In the 1980s and 1990s, Israel conducted airlifts that got most of them out of Ethiopia and resettled them in Israel. The company’s website includes recipes for making t’ej cocktails.

♦ Yamatt Tej, Rabbit’s Foot Meadery, Sunnyvale, CA. The creation of Menkir Tamrat, the name means “mother-in-law’s t’ej,” but it’s also a portmanteau of the names of Menkir’s sons, Yared and Matias. “I would say this is a win-win,” Menkir wryly explains. “The kids are happy, and the wife’s side of the family is happy, too.” After many years working in technology, Menkir retired to begin producing Ethiopian foods: He grows peppers to make spices like berbere and mitmita, teff to make injera, and he sells his t’ej in the California bay area.

♦ Nigest Honey Wine, Awash Winery, Addis Ababa, Ethiopia. This one is hard to find: It’s the sole t’ej made in Ethiopia and imported to the U.S. of which I’m aware. You’ll find it from time to time in Ethiopian restaurants and markets, imported here and distributed by Kebede “Teddy” Tadesse and his Baltimore-based company, Global Shipping Services. If you find it in a market – most likely in the D.C. area – snatch it up.

♦ Makeda Tej, Mountlake Terrace, WA. This t’ej, made my Ethiopians in a suburb of Seattle (which has a large Ethiopian population), is a deep rich yellow, much like you find in Ethiopia, and soon, the company will begin online sales.

♦ Begena Tedj, Frankfurt, Germany. Wilhelmine Stordiau was born and raised in Ethiopia, the great-granddaughter of an Ethiopian woman, and her family returned to Europe when she was 18 after a Communist dictatorship deposed the Ethiopian emperor. Many years later, she decided to make this t’ej (German spelling: tedj) as a return “home” for her. A begena is an Ethiopian stringed instrument similar to a lyre. Frankfurt has nearly a score of Ethiopian restaurants, more than any other German city, and Stordiau markets her t’ej to Ethiopian restaurants all around Europe.

♦ Tej, Örebro, Sweden. A company called Honeycomb Sweden brought this t’ej to market for sale in Europe, and you can now find it at more than half a dozen restaurants around Sweden (including Gojo, an Ethiopian restaurant in Stockholm, according to the winery’s website). I’ve never tasted it because they don’t ship to the U.S., and even Stordiau has had no luck in getting them to send her some. But the bottle looks elegant, so if you’re ever lucky enough to try some, let me know how it tastes.

The front label of my t’ej

The back label of my t’ej 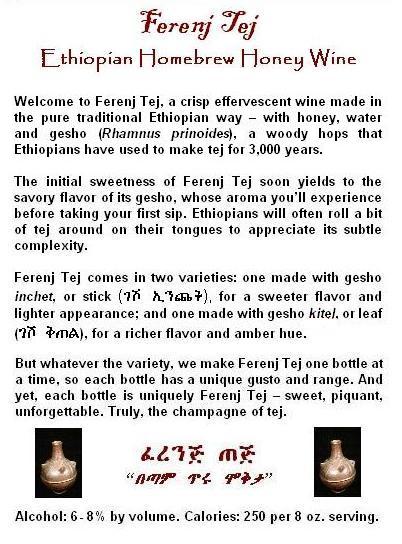 Tej Is the New Merlot