By Harry Kloman, University of Pittsburgh

IF THERE’S AN AMHARIC WORD FOR “COCKTAIL,” then nobody seems to know what it is. At least, nobody I know: I’ve asked some Ethiopian friends, and they tell me there’s no such word. That’s probably because Ethiopians in Africa take their alcohol straight up.

In fact, my friend Menkir Tamrat tells me that mixed drinks are rare in Ethiopia.

“Some folks drink tonic water and just ask for vodka tonic,” he says. “When I was a teenager – no drinking age limit there, just an honor system – there was a mixed drink in Addis known by the name of green fire. I was too ignorant to ask or know what it was made from, but the color was green, as the name suggests. Must have been some crème de menthe in there, but it was cheap and got you drunk quickly.”

Menkir makes Yamatt Tej, which he sells in the bay area of northern California where he lives, and he’s created a cocktail that you can prepare with his t’ej (or any t’ej, I suppose). He calls it the Yamattini, and you make it with three ounces of gin, one ounce of vodka, and a half ounce (or more, to taste) of t’ej. “Throw in a twist of your favorite citrus peel and give it a whirl,” Menkir says. “Shaken or stirred.”

There may not be cocktails in Ethiopian culture, but Ethiopians of the diaspora own businesses that sell food and alcohol, and some of them have improvised, creating Ethiopian-themed cocktails as an additional revenue stream.

For your convenience – and, I hope, your drinking pleasure – here’s a roundup of what I’ve found.

♦ Begena Tedj, which is made in Frankfurt, Germany, has a page of a dozen recipes for cocktails that Wilma Stordiau, the company’s owner, has created and that you can make with her t’ej and katikala, a hard liquor that you could call the Ethiopian vodka.

The Arenguada (Amharic for “green”) blends t’ej, katikala and a sweet green pepper as “an extravagant decoration that keeps flies away.” A Bitcha (“yellow”) substitutes a yellow pepper for a green one and adds a few strawberries. The Neb (“bee”) blends the potables with grapefruit and orange juices. To make an Ethio Jam, mix katikala, t’ej and cane sugar.

♦ Lost Tribes Brew launched a sparkling t’ej in 2014, and along with it, the company created nearly a dozen cocktails made with t’ej. On the company’s t’ej cocktail page, click each image to see the ingredients and a how-to video for each one.

To make a Wildflower Spritz, blend 1.5 ounces of aperol, one ounce of lemon juice and three ounces of t’ej. Mix them all up and serve in a chilled glass. The Marigold Margarita blends 1.5 ounces of tequila, half an ounce each of lime and lemon juice, and an ounce of orange juice, all tossed around in a cocktail shaker. Then, pour it over crushed ice, and top it with five ounces of t’ej. A drink called Something Sweet is more of an alcoholic dessert: pour some t’ej, to taste, over some ice cream, swirl it around, then top it with chocolate.

♦ You’ll find lots of Ethiopian-inspired cocktails at Sheba Piano Lounge in San Francisco. They go by names like Red Sea, Sheba Combo, Selassie, Abyssinia Storm, Harrar Cooler, Makeda Martini and Addis Champagne Cocktail. But only one involves t’ej: The Atse Tewodros, served hot, combines bourbon, t’ej, ginger, citrus, spices and dehydrated lemon. Actually, the menu lists the drink as “Aste” Tewodros, but that’s a misspelling: The word they want is atse, which means emperor. Tewodros was a 19th Century Ethiopian emperor whose challenge to Queen Victoria ended with his suicide after the British army invaded Ethiopia to free some hostages that Tewodros had taken.

♦ Oliver Winery and Vinyards of Bloomington, Ind., makes a mead, not a t’ej. But its website has a full page of mead cocktails, so why not substitute t’ej for Oliver’s mead? At the site, click each image for the full recipe. You’ll find such delights as a meadmosa (t’ej, orange juice, sparking water), a St. Patrick’s meadtini (t’ej, lemon juice, ginger syrup) and for December, a mulled mead (t’ej, orange juice, apple juice, mulling spice).

But wait: Where’s the t’ej? Winery t’ej is difficult to get in Canada, and the restaurant can’t use homemade t’ej because selling it is illegal. That’s why there’s honey in the drink. So if you make this at home, just substitute t’ej for the rum. Nunu does make her own t’ej and sometimes shares it for free with customers just to give them a taste. The restaurant also sells Ketsela Giorgis, a craft beer on tap made by Amsterdam Brewery in Toronto. It’s a stout made from the recipe that Nunu Ketsela’s mother used when she ran a big establishment in Nazareth, Ethiopia, that made t’ej and t’alla.

♦ There’s nothing worse than a Sour Queen – unless it’s the name of a cocktail made with t’ej. To make it, mix the following: three ounces of t’ej, one and a half ounces of gin, three-quarters of an ounce each of honey syrup and limoncello, one ounce of lemon juice, one tablespoon lemon zest, a few dashes of lavender bitters, and two ounces of water. And you can even watch a video of it being made.

♦ In 2011, at the Change Maker’s Ball in New York City – an event to raise money for the group Self Help Africa – they served a cocktail that consisted of three ounces of rum, a half ounce of t’ej, two ounces of African red tea, a half ounce of orange juice, a few dashes of bitters, and garnishes of sweet plantain chips and fresh mint. That’s not a lot of t’ej, so you may want to alter the recipe to taste.

♦ Hugh Schick, a “tone scientist/inventor” (says his website), makes Zula Tej and has a cocktail recipe: one part orange juice, one part brandy, three parts t’ej, a sorrel leaf, some orange zest and a gesho twig (optional, he says, but of course, the t’ej will have been made with gesho). You begin with the orange juice and sorrel in the glass, then add the t’ej and brandy, garnish it with orange zest and gesho – and do not stir. James Bond would approve.

♦ The website Cocktails & Shots has published a recipe for a t’ej cocktail that combines two ounces of t’ej, two ounces of rum, an ounce of lemon juice a “a little club soda.” You can top it with an orange slice or a maraschino cherry. And if you don’t have t’ej, the recipe says, you can improvise a substitute: Boil a cup of honey until it’s lightly caramelized (10 to 15 minutes), add three finely ground cinnamon sticks (though I suppose some powdered cinnamon will do), three finely grated nutmegs (or, again, some powdered nutmeg), and a cup of pear puree. Boil it all for another 10 to 15 minutes, stirring often, then cool before use. Or just find some t’ej.

♦ Finally, although there are no t’ej cocktails at Demera, a popular Ethiopian restaurant in Chicago, the menu lists five house cocktails with Ethiopian themes. An Addis Ababa is a margarita that adds touches of cardamom and ginger, two common spices in Ethiopian cuisine. The Koshasha (“filthy”) is Demera’s take on the dirty martini, a blend of vodka, olive juice and “a fiery kiss of awazi sauce” – that is, a spicy red pepper sauce, more properly spelled awaze, made with berbere. It’s “hot to trott,” the orthographically challenged menu promises.

And you don’t want to miss out on the Kaffe, made with coffee liqueur, Bailey’s Irish Cream “and our own brewed coffee.” It’s “dessert in a glass” from “the birthplace of the coffee bean.”

Of course, there’s no reason why you couldn’t substitute t’ej for any of the alcohol in these neo-Ethiopian cocktails. 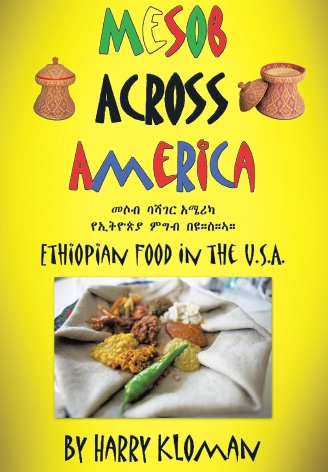 The front label of my t’ej

The back label of my t’ej

Tej Is the New Merlot 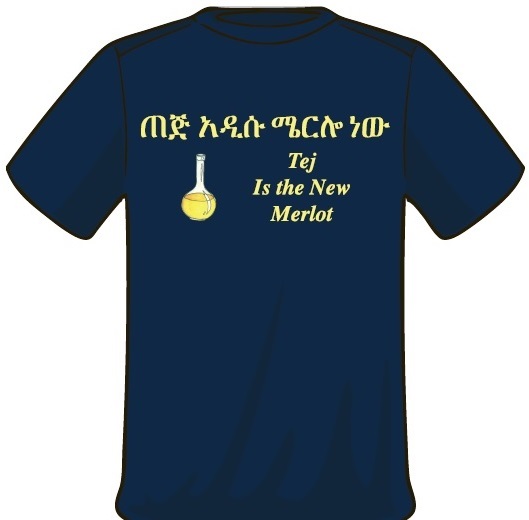